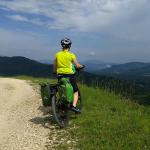 From Trieste to Poreč on the former railway line

The former narrow-gauge track (760 mm in width) between Trieste and Poreč, which operated from 1902 to 1935, was named after the word Parenzo – Italian name of the town of Poreč, therefore being also called Porečanka. It represented a connection of the hinterland with the coastal places and strongly contributed to the Istrian economic development. The railway line stopped operating in 1935, but despite operating only for 33 years, it left an indelible mark in the whole area. On the 100th anniversary of the opening of the railway track, an initiative started to restore this unique railway line, which at the beginning of the 20th century connected people and nations. Today it represents a popular cycling and hiking path.