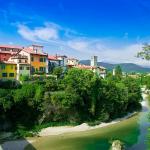 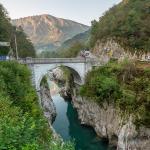 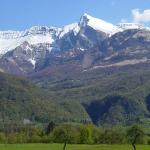 Follow the Natisone River and dominant Matajur, symbols of the Venetian Slovenia, on the main of the Natisone Valleys, which connects Cividale del Friuli with the Soča Valley, while the Sanctuary of Sveta Gora shows on your right. Follow the smaller and hotter of the two emerald rivers against the flow, which follow you along the entire trail, loved particularly by bathers. On the local signs you see that you cycle through a bilingual area with the condensed community. With the exception of a few very short sections, this stage of cycling route is practically plain, since it remains all the way close to both rivers. The section around the former border crossing point in the canyon between Mija and Matajur is scarcely inhabited, yet the richest part with the forests and wild animals on the trail. In the highly lying villages, affected by emigration, "burnjak", a festival of chestnut is still celebrated.

Look for the cycling route above Natisone River, from the old city centre of Cividale del Friuli on the left bank up to the settlement Pri Mostu, going on the other side of the river, and cycle through villages  Dolenji Barnas, Španjud, Bijače and Laze. In the middle of the road there is a line from the top across Breginjski kot (Breginj Corner) with the turning for the Cave of San Giovanni d’Antro. On the opposite bank, there is San Pietro del Natisone (Slovene: Špeter), a cultural centre of Venetian Slovenes, with its bilingual school and Venetian museum. In order to cross the former border crossing point, you must join the main road in Log. On the same line Cividale del Friuli – Kobarid, a train used to drive once, but the line was cancelled, and today only a few rests of the track and station in Štupica bear witness to it. In a few kilometres you leave the lowland in the Friuli Venezia Giulia by the sea and cycle to the foothills of the high Alpine peaks, while Matajur and Krn show you where to go.

On the Slovenian side, in front of the village Robič, there are Natisone River pools, designed for bathing, and after passing the village you turn from the main road on the path going across Kobariško blato (Mud of Kobarid). At this point you, you say farewell to the Natisone River and join the Soča River in Kobarid going along a nicely arranged macadam below Matajur, through the villages Sužid and Svino. The latter invites you already at a distance with its view of the Saint Anthony Church and Italian Ossuary and Krn in the background to take a long rest. The villages below Krn or the upper flow of the Soča River with Bovec are undoubtedly worth visiting, and you decide to visit them at the Napoleon Bridge in the Soča Canyon. Our path simply joins the river’s flow up to Tolmin so that you can follow it through the villages on its left bank.

Passing the Ladra village, a view of the Krn mountain range follows you, while you are still caught between the Kolovrat ridge on the other side, where bloody Soča battles of World War I took place. In the village you can decide for a slight ascent and visit a small St Lawrence’s Church with a tomb of the poet Simon Gregorčil and view of the Soča River. First you follow the river through the villages Kamno and Volarje, while in the village Gabrje you may decide also for the Alpe-Adria Hiking Path. Before arriving in Tolmin, above which there are castle remains, you can also visit the Tolmin Gorges so that you slightly turn left in Dolje for Zatolmin. Set off from gorges directly past the cemetery of the World War I on Loče and doing a part of a circular route around the town.