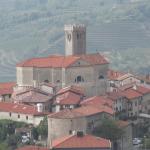 Wine roads of the Slovenian and Italian Gorizia Hills

After visiting both Nova Gorica and Gorizia, cross the Soča River and first cycle in the Italian territory on the southern edge of Gorizia Hills. Collio is only another name for the hills with settlements, and it is finally not divided anymore with the national border. After crossing the Peuma Bridge, one of the oldest on the Soča River and important also for Slovenians from the lower parts of the Gorizia Hills, turn left and only then towards San Floriano del Collio.  While ascending, in the hamlet Bucuie (Slovene: Bukovje) split off through Valerisce towards Giasbana, but after a short descent among vineyards and after crossing the national border, turn right into a hill and just pass Gornje and Dolnje Cerovo. In the village Vipolže you can decide to continue on an easier road towards Cividale del Friuli by going towards Dobrovo or Plešivo. You can start the circular route in Gorizia Hills, where you can taste excellent wine and dishes, passing the castle in Vipolže and continuing cycling along the narrow and wavy roads and villages with nice views, yet making quite a few ascents.

The path towards Šmartno and further on constantly rises, while pedaling through a long village Kozana and on the main road arrive in already mentioned village, one of the most beautiful in the surroundings. In the neighbouring Gonjače, a magnificent view of all sides opens to you on a tower: from the Dolomites to the Gulf of Trieste. A crossroad follows, where you turn in direction for Plave, while in Vrhovlje get down from the main road in Lig-Korada direction. Reaching the highest point in Gorizia Hills, turn left again towards Višnjevik, known as a birthplace of Rebula (Ribolla). An ascend awaits you through the villages Krasno and already mentioned Višnjevik, Drnovk up to Dobrovo, the centre of winegrowing surrounding, where you continue your trail towards Medana, a picturesque village with numerous renowned winemakers, passing the prominent castle.

Descend past Ceglo and while crossing the border in Plešivo, turn right to Corno di Rosazzo, where a part of the road in the territory of the eastern Friulian Hills starts. While approaching Cividale del Friuli from the south, you can admire endless vineyards. From Plešivo you can decide to visit also the nearest town Cormons, or the park Plešivo, a hill with a settlement and Ruttars Castle in the south, and cross the border river Indrija below the castle. Among the fields along the side paths between the hamlets Gallo and Gramogliano Corno di Rosazzo bypass Corno di Rosazzo, where you ascend for the last time on a hill San Biagio before Cividiale del Friuli. Descend in the park Bosco Romagno, with the name of Lombard origin and with the strategic meaning through the centuries, today just appropriate for taking a rest, with its meadows and a number of tree species.

From the northern entrance in the park, cycling along the lower parts of Spessa among cereal fields and vineyards follows, in parallel with the main road Corno-Cividale del Friuli. After passing the church between Spessa and Gagliano go along the cycling route, which winds among the plain plantations of vineyards, fruit trees, olives and cereals. In direction towards Prepotno, there is an endless number of vine varieties on the hills and slopes, which immensely cross and cover, whereas on you left you can see the Rocco Bernardo Castle and Wine Cellar. Continue your route on the side roads from Gagliano up to the hamlet Rualis, where you join the main trunk route and through which you enter Cividale del Friuli, having the Natisone River tightly by your side.