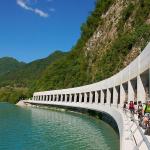 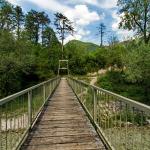 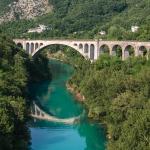 When the Soča River rests

The Tolminka River Valley is a protected area of the Triglav National Park. At the most southern entrance in the park near Tolmin, there is a confluence of the two rivers, of which the smallest one creates picturesque Tolmin Gorges. By bicycle, you can reach one of the most beautiful monuments of the World War I, i.e. a Memorial Church of the Holy Spirit in Javorca, and on the way you can taste the home-made cheese Tolminc and curd.

Leave Tolmin at the confluence of the Soča and Tolminka Rivers, a venue of many festivals in the summer, and continue along the cycling route by the lake up to Most na Soči. The town on the natural peer between the Soča and Idrijca Rivers is one of the most important archaeological sites in the area of South-Eastern Alps with the walking paths by the lake. On the main crossroad in the town turn into an ascend towards Tolmin Lom, which soon finishes in the hamlet Drobočnik, where you turn right on the shelf above the lower part of the lake towards Gorenji Log. The only hard passage on the way through the Vogršček brook ravine, past the Babja jama (Hag Cave), follows. The path takes you up and down and along a narrow side road or rut to Avče and then slightly descends along the path towards the Medieval town of Kanal in the central Soča Valley with Kontrada, a stone square surrounded with the tightly built buildings above the Soča River.

At  this point you change the left bank of the Soča River for the right one up to Solkan by crossing the stone Kanal bridge above the Soča Gorges, which is the symbol of the small town Kanal. The trail takes you along the local path through the settlements Gorenja vas, Anhovo, Deskle and Plave below Korada. Turn left at the bridge over Soča in Plave from the road Plave-Gorizia Hills in Prelesje and then continue right up to the Solkan Bridge with the view of Sveta Gora along the cycling path right by the artificial lake on the Soča River. Before the new Solkan bridge, you cycle past the old railway bridge with the largest stony arch in the world, along the Bohinj Railway Line, which once used to connect Vienna with Trieste. In Solkan, Soča leaves the Alpine and pre-Alpine worlds and you also leave it here, since you cross it only one more time in Gorizia on the way to Gorizia Hills. First you break through the narrow streets of Solkan, which is one of the oldest settlements in the Soča Valley region in comparison to Nova Gorica, a vivacious town with a mild climate, which was formed as a substitute to Gorizia, which had remained behind the border.

Cycling through Nova Gorica, designed as a park, leads you to Erjavčeva Street, one of the streets going to the railway station in a shape of a fan. At the same time, it is a town of roses and has a lot space devoted to green vegetation. Continue along the Erjavčeva Street up to the Europe Square and to the railway station with the museum about the border. After the World War II, the present junction of cultures was divided into Gorizia and Nova Gorica. The area of the last East-European border, which divided the Transalpine Square with the railway line and station with the same name, has been transformed into the Europe Square with a museum that unites. With the border after the war, the above-mentioned railway line with Trieste was also broken, while today the younger sister of Gorizia tries to create together with Gorizia a future without border crossing points, in an increasing co-existence on all the levels.

In comparison to its younger sister, Gorizia offers numerous historical buildings. It mild climate and numerous parks have contributed to the fact that it has been also named the Adriatic Nice. You must visit the main square with narrow shopping street, above which the castle of Gorizia Counts rises. When leaving Gorizia, you may also visit one of the parks, i.e.  Piuma – Isonzo Park on the Soča River banks.