Emerald Green Trail: Towards the seaside 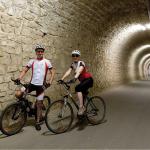 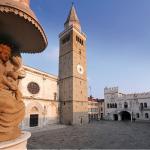 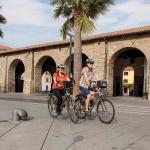 From Karst to Istria

Before you "soak" in the blueness of the Adriatic Sea, karstic characteristics, such as caves, caverns, sinkholes, underground rivers, stony commons and almost no vegetation still accompany you on the route. By the path, which gently descends, you meet one of the three Slovenian sights entered in the List of Unesco World Heritage Sites – Škocjan Caves. This is a complex of caves and passages, covered with stalactites and stalagmites, created by the disappearing Reka River, which for more than 40 kilometres runs underground and flows out in the Trieste Gulf at San Giovanni di Duino as the Timavo River. Set off towards Kozina, lying on the extreme edge of the Karst. From here, you cycle towards Črni Kal with a typical inclined bell tower (a portal of Bevk’s house, the oldest farmhouse in Slovenia). A decisive descent follows along the valley of Rižana River, where you reach the route of the formed railway line Porečanka (Parezana). At the beginning of the 20th century, the latter one connected Trieste with Poreč, whereas today there is a much visited and excellently equipped cycling route, passing a nature reserve of the Škocjan Inlet up to Koper, Izola, till Portorož. You can continue cycling along the coast up to Piran.

The path takes you from the centre of Lipica along a macadam road to Lokev, where a magnificent defence tower stands. It was erected as a defence against Turkish invasions and today there is a rich collection of weapons, uniforms and other military weapons in it. Then you cycle up to the entrance in the Škocjan Caves Regional Park in the municipality of Divača. You simply cannot miss the visit of caves, which represent one of the greatest tourist attractions in Slovenia. After vising them, continue cycling up to the edge of the plateau (to the town Kozina), through which another cycling route goes. This is a section of the cycling route between Trieste and Hrpelje (you will cycle over a part of it on the second day of the next week), going along the former railway line between Trieste and Ljubljana. A bit lower, there is a town Črni Kal, soaked in a greenery, where the whiteness of the St Valentine Church stands out. Here the road descends into wide curves and reaches the valley of the Rižana River and then the route of the former railway line Porečanka – Parenzana, which from 1902 to 1935 connected Trieste with Poreč with a narrow monorail in the length of 123 kilometres. A few years ago, on this line, a cycling route was set-up with the label D8, called a Path of Health and Friendship  Porečanka - Parenzana. Cycle on a beautiful cycling route to the natural reserve Škocjan Inlet, the largest salty wetland in Slovenia, and then to Koper and its wonderful old centre with the noticeable Venetian influence. To reach Izola, cycle along the cycling route designed also for other users, by the seaside. Pass through a tunnel to Strunjan, where once used to be salt marshes. After passing through the second tunnel, you reach Portorož (in the municipality of Piran), a famous tourist place in the Slovenian Istria with a hundred-year-old spa tradition. Mud used in spas comes from Sečovlje salt marshes, a landscape park, ten kilometres from Portorož (in direction of the border with Croatia).