Emerald Green Trail: it is marvellous across the Karst 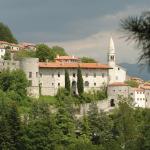 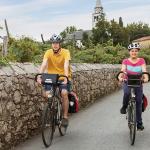 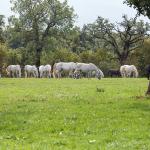 On this cycling stage, you get to know the Slovenian Karst, an area with a wide range of historical, natural, cultural, gastronomical and oenological particularities. The route winds with frequent, but not very fatiguing ascents on a magnificent limestone plateau, which rises above the Gulf of Trieste. Cycle prevailingly on the narrow roads, designed for different kinds of traffic, which is quite rare. The roads are surrounded with stone fences, which give a feeling that they get lost in the distance. Here nature is the master, formed by the bora wind and adorned by numerous Karst phenomena and unique colours – colourful autumn scenes are unforgettable. Then, an old small village, remains of the Medieval fortress, a bell tower show that you are back to civilization. After turning, a view of the Gulf of Trieste reveals to you, which expands underneath. When you leave Nova Gorica, the path follows the border with Italy, which you can notice from bilingual names of border settlements. Our target is famous Lipica and its hundred-year-old stud farms.

Leave Nova Gorica and cycle to Šempeter, where there is the church of St Peter of the 15th century, a manor of the Counts Coronini and a manor Mafejšče. From here, a nicely arranged cycling route takes you to Miren, above which the church of Our Lady the Sorrows stands on Miren Castle. After some not very demanding hills and macadam sections of the road, you arrive in Lokvice. Sela na Krasu follows, from where you may enjoy in the view of the Trieste Gulf. In Šrkbina you visit the house of the painter Lojze Spacal and cross the small village Sveto with a small church dedicated to St Aigis – it is one of the most important examples of the sacral architecture in Slovenia. From here, you cycle in the heartland of the Karst, go through settlements Pliskovica and Dutovlje, an important vineyard centre specialized in Teran wine production. You can arrive in Dutovlje also through Štanjel, representing the greatest tourist sight of the Karst with its castle and walls. Tomaj is the next settlement, where you can visit the birth house of Srečko Kosovel, one of the most important Slovenian poets. Magical paths take you to Sežana, economic centre of Karst, with a more than a hundred-year-old botanical garden. You finish your cycling stage in Lipica, home of the world-renowned Habsburg stud farm since the 16th century, from where the white Lipizzaner horses originate. Here, it’s all about equestrianism: manège (horse training), courses, exhibitions, trips on a horse’ saddle, rides with a carriage, visits of historical stables, etc.