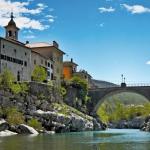 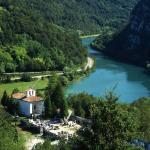 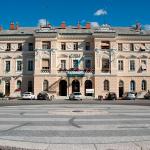 Where the mountain breezes mix with Mediterranean scents

On the third day, you are still in the Valley of Soča – in its middle flow. Leave Tolmin cycling along the panoramic trail past the numerous natural, cultural and historical points of interest, which make cycling even more attractive. Return to Most na Soči on the same way you arrived there – i.e. on the left bank of the Soča River. Take the paved road and a part of macadam road and arrive in Kanal, crossing the bridge of the 16th century, a symbol of this place. This bridge, several times destroyed and reconstructed in the past, is renowned for the World Championship in the jumps in the river. Otherwise, you may visit Kontrada Square with a Gothic House and a Parish Church of the Assumption of the Virgin Mary (of 1431). They you cycle to Plave, where numerous battles took place during the World War I. The river slows down a little bit here and lazily meanders. While cycling along the paved cycling route, enjoy in a peaceful shelter of Soča. Vegetation changes all the time. The mountain scents disappear to the Mediterranean fragrances. At the end of the cycling route by the Soča River, you see a magnificent Solkan Bridge, boasting of the longest stone arch in the world -  a real construction masterpiece dating back to the 20th century. From Solkan you suddenly arrive in Nova Gorica, connected with the neighbouring Italian Gorizia with the so-called Europe Square (piazza della Transalpina), a symbol of brotherhood of these two border cities.

Set off  from Kobarid, Tolmin or Most na Soči. Near Most na Soči it is worth visiting cultural and historical sights (Italian Ossuary, Tonovec Castle) and unique natural points of interest (Kozjak Waterfall). After crossing the Napoleon’ Bridge, turn right and follow the left bank of the Soča River towards Tolmin, from where you continue towards Most na Soči and then to Kanal, a beautiful small town with a baroque touch, whose symbol is the stone bridge over the Soča River. This was destroyed and restructured several times, also mentioned in Hemingway’s novel A Farewell to Arms. It is still a centre of social life in this town, even up to the point that at the height of 17 metres, it has become a springboard for the renowned international and World Championships in Water Jumping. Cycle along the right bank of the Soča River, which becomes increasingly winding and offers you unique scenes. Go through Plave and Prilesje with the church of the Saint Acacius. A well-designed cycling route by the river takes you through a gorge under the second important bridge, this time a railway bridge. This extraordinary product made with human hands stands at the entrance in Solkan and boasts of the world record – with its 4,533 cuboid stones made of limestone from Aurisina quarry area and 85 metres in length, it is the longest single-arch railway bridge made of cut stone in the world.  When you cross it, you go in direction to the new Solkan bridge, which leads towards Nova Gorica. The city grew up after the Wolrd War II on the Slovenian side (opposite the Italian town of Gorizia). Here it is worth visiting the railway station of historical importance, in front of which the Europe Square expands, which has become a new symbol of the two neighbouring cities. Only a few metres from the national border, there is an old city centre of this Friulian town. On a hill, at the outskirts of Nova Gorica, there is a Franciscan Monastery Kostanjevica with a small Church of the Assumption of Mary, a library and a tomb of Bourbons, where the last descendants of Bourbons family are buried.