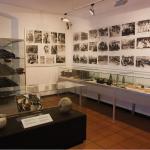 By the emerald river

Most na Soči, known for the reservoir lake, mouth of the Idrijca River into Soča River, and particularly for unique archaeological findings, is a place that will not leave you indifferent. In Tolmin, famous also for the peasant revolt (Tolmin peasant revolt) in the 18th century, you can also visit the Tolmin Museum, remains of the Medieval castle on Kozlov Rob (Goat’s Edge) and Hudičev most (Devil’s Bridge) in Tolmin Gorges. Continue cycling along the sunny bank of the Soča River until crossing a big single-arch stone Napoleon Bridge, boasting before entering Kobarid. The place is known for a famous battle that took place in November 1917. The fitter ones may continue cycling towards Bovec and perhaps up to the source of the Soča River and visit the Boka Waterfall. Return to Kobarid follows. Anyhow, the Soča Valley is in full symbiosis with other natural gifts and a real heaven for the athletes (kayak and raft athletes, mountain bikers, paragliders, runners ...), fishers, hikers, mountain climbers, cavers, historical and festival tourists (Soča Festivalley) etc.

After arriving by train from Jesenice or Bled to the station (this is two kilometres away from Most na Soči), you find yourself on the territory, known for archaeological findings linked to the period of the Late Iron Age (Saint Lucia culture) and the period of ancient Romans. The curious ones may walk along the cultural and historical trail Čez most po modrost “To stroll across Most na Soči to get wisdom”. After visiting this small town with extremely rich history, sit on a bike and cycle in direction of the Soča River flow (the cycling route continues along the valley to the south) or in direction against the water flow. The Soča Valley offers you its unforgettable nature. Below the mountains there are lakes, waterfalls, rapids and endless interesting corners, which will not leave you indifferent for sure. At the main junction in Tolmin, you turn right towards Zatolmin and Tolmin Gorges, lying on the extreme lower edge of the Triglav National Park. Here, in addition to the limpid greyish blue Tolminka River, you can find a big rock in the shape of a bear’s head entrapped between the walls of the troughs of the Zavladaščica River, the Hudičev most (Devil’s Bridge), expanding 60 metres above the river, and the Dante’s Cave in an immediate vicinity. It is alleged that it is here that the poet Dante Alighieri got inspired for Inferno (Hell), described in the first part of the Devine Comedy – remember this when you will visit the Dante’s tomb in Ravenna. Ride on a bike along the sunny bank of the Soča River through the villages to Kobarid. Before going into the town, you cross the Napoleon’s Bridge. Since it is here where the bloody history of the World War I was made, a permanent exhibition of the Kobarid Museum is dedicated to this topic. A beautiful view of Kobarid and its surrounding is offered to you from the Italian Ossuary, positioned on a hill, rising over the town. It is recommended that those who are physically more prepared continue their path on the right bank of the Soča River through Žaga and Log Čezsoški towards Bovec. On the way, they can visit the Boka Waterfall, ranking among one of the most magnificent waterfalls in Europe with its 144 metres in height and 18 metres in width. Those who want to visit the Soča birthplace have to cycle to the Valley of Trenta, lying in the Triglav National Park. When returning to Kobarid, another trip – this time a culinary one – awaits you in the restaurants there, joined in the Kobarid gastronomic circle.