Emerald Green Trail: in the shelter of Triglav (along the valley) 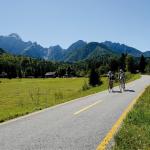 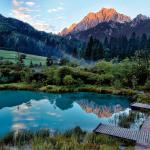 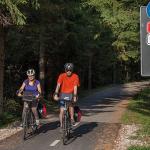 From a tripoint along the Sava Cycling Route

The cycling route passes the Tarvisio railway station in direction towards the Slovenian border by the Belopeka Lakes, which lie on one of the coolest areas in Italy. Cycle along the route of the former railway line Ljubljana-Tarvisio. This is a good example of reconstruction of the abandoned railway line in a path designed for cyclists and pedestrians. Continue your trip through a green landscape (with one word "greenway") and enter Slovenia in Rateče. Soon you reach the centre of Kranjska Gora, a town renowned for hosting the World Alpine Ski Championships. Along the Sava River, you arrive in an interesting town Mojstrana, an old mining centre. Here three beautiful Alpine valleys Vrata, Kot and Krma split off and indents into the Julian Alps up to Triglav, the highest mountain in Slovenia  (2,864 metres). Gradually descend to Jesenice, an important railway hub and then go in direction towards two Slovenian pearls, i. e. Bled Lake and Bled, which is adorned by a small island in the middle of the lake. Here, you embark onto a train, which drives you to the Soča Valley.

Alpe-Adria Cycling Route leads through the border town from north to the south, from Austria through the Italian Buja, Udine, Palmanova, Aquileia up to Grado. A 175 metre-long route goes through three border countries and connects other cycling tours into a network, too, for example Drava cycling route. From the abandoned Tarvisio railway station go towards east and leave the cycling route leading to Austria and Arnoldstein. Turn right towards Belopeka Lakes and border in Rateče, above which Peč (1,510 m) rises, which marks the tripoint between Austria, Italy and Slovenia. Continue cycling on a beautiful paved cycling route, going along the railway line of the 19th century, which used to connect Tarvisio with Ljubljana. This will take you a considerable amount of the day. You pass big meadows and cycle through thick and refreshing forests. On this way, you can turn towards Planica, where numerous world records have been achieved on the famous ski jumping hills. Our next target is Kranjska Gora, a famous holiday resort, which especially in the winter invites a number of domestic and foreign guests on its ski centre resorts. Here you may admire the Church of the Assumption of Mary and the Liznjek House of the 18th century, a wonderful example of the landscape architecture, where there is an ethnographic museum today. The Sava Dolinka, one of the upper parts of the Sava River, offers magnificent scenes of the grassy landscape, sown with typical wooden drying frames made for hay drying. It is recommended to visit the Slovenian Mountain Pasture Museum and Pocar Homestead, one of the oldest places of residence in the Triglav National Park, where there is a well-arranged exhibition space today. After a short stop, go towards Jesenice, where the cycling route ends. On the way to Bled Lake, you are brought closer to the Alpine forests again. Here you sit on the train and after an hour of a ride through numerous tunnels and galleries, which mark the Transalpine or Boginj railway line, you arrive in the Valley of Soča - Most na Soči exit station.